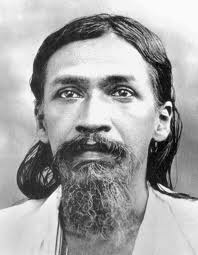 Sri Aurobindo (1872-1950): “Sri Aurobindo’s unique contribution to human potential and growth developed through his integration of Western and Eastern cultures. He brought the energy and vision of the West, with its focus on the perfection of the physical, material and mental areas of human life together with the spiritual development and philosophical directions developed over thousands of years in the East.

Sri Aurobindo honors the contribution of each of these divergent streams of human activity. His writings help us reconcile the apparent conflicts of two diverse societies and at the same time develop a new, wider, embracing viewpoint which vibrates with spiritual force, mental clarity and a heart of love and compassion for the efforts of humanity.

Sri Aurobindo has been considered one of the foremost philosophers of the 20th Century, but he was far more than just a philosopher. He was a political activist, a mystic, a spiritual leader, and a poet, a yogi and a teacher. Sri Aurobindo experienced the range of human activity and used that experience to communicate his insight in a way that we can appreciate and understand.”  -Quoted from aurobindo.net

In my own words, Sri Aurobindo has taken the more traditional and, at times, dogmatic approaches to yogic philosophy and opened them up to the modern spiritual aspirant who is well versed in the integral practices and studies of the modern, global, scientific, evolution based, and world-centric consciousness.  He was a radical visionary and pioneer of what is known today as the Integral Movement.

“Sri Aurobindo came upon earth to teach this truth to men. He told them that man is only a transitional being living in a mental consciousness, but with the possibility of acquiring a new consciousness, the Truth-consciousness, and capable of living a life perfectly harmonious, good and beautiful, happy and fully conscious. During the whole of his life upon earth, Sri Aurobindo gave all his time to establish in himself this consciousness he called supramental, and to help those gathered around him to realise it.” -The Mother